My Baby You'll Be 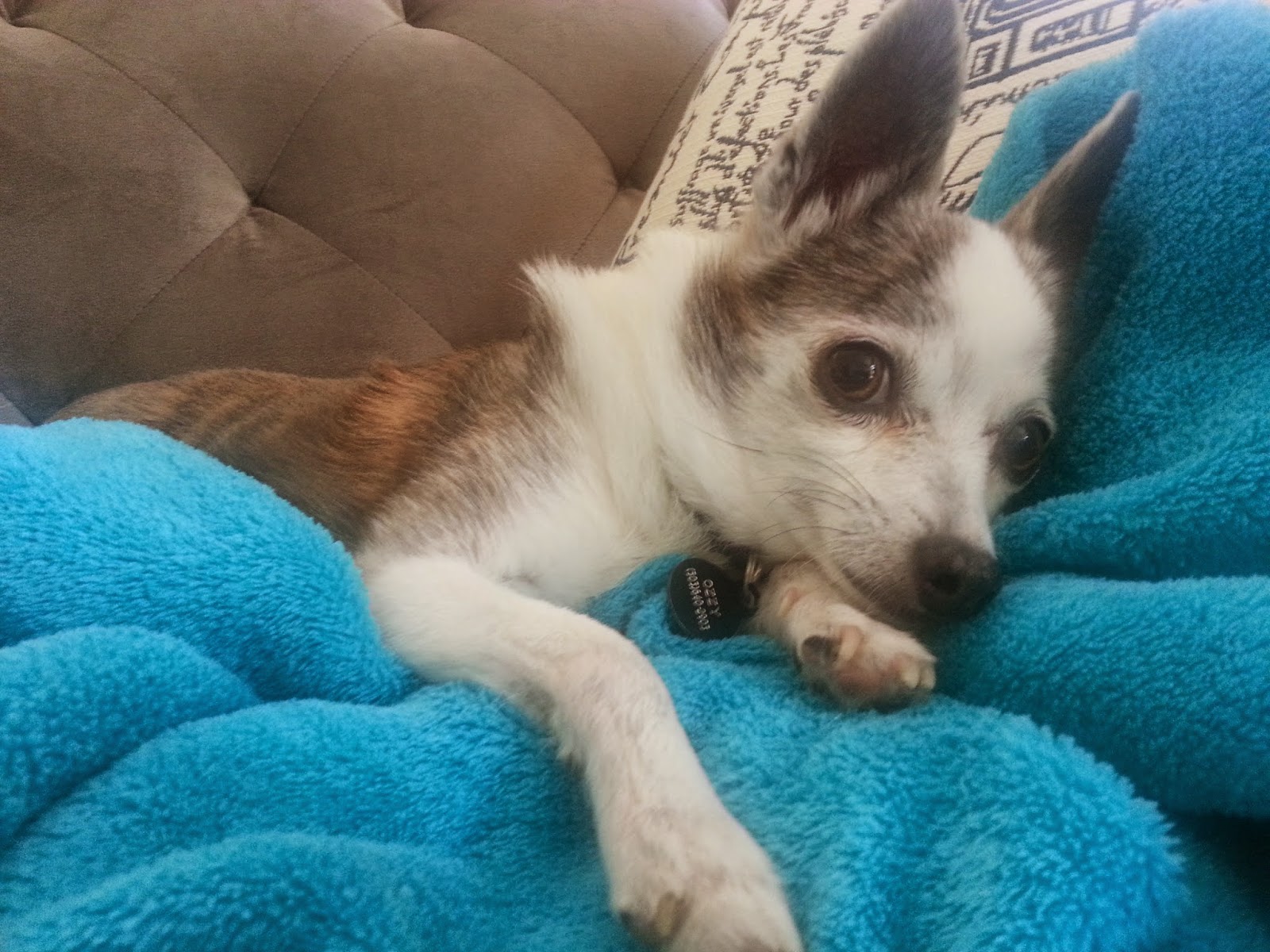 This is my first baby, Ozzy.  Long before I had biological babies, Ozzy stole my heart with those soulful eyes and just-love-me-into-a-cuddle-coma attitude.  It didn't hurt that at the shelter, he peed on my husband to solidify the bond that he belonged to us.

At the time, we weren't looking for another dog, just a hamburger at the Wendy's next door to the shelter.  Isn't that how it always happens, though?  You can't actively look for love, it will find you when you least expect it.  Especially if you order the cheeseburger combo with a side or adoptable adorable.

Yes, my first baby weighed in at about 7 pounds and 15 inches long, with the shelter given name of Little Man, but we knew that had to change.  On the car ride home, my husband and I debated the name game, and you know how that goes.  He loves Barney, you hate it.  You love Fitz and he threatens to crash the car.  So we turned on the radio while we brainstormed.  "I'm goin' off the rails on a crazy traaaainn...."  We both started bobbing our heads.  There's nothing a little Ozzman can't fix.  Wait a minute!  Yup, loved the name.  And his name was Ozzy and he was perfect.

You know how you're not supposed to pick favorites?  Well, I did and so did Ozzy.  I couldn't go anywhere without a little Ozzy shadow and even if he was all cuddled up with my husband on the couch, as soon as I sat down, he'd bolt over and cuddle into me.  We were soul mates.  In fact, we were so attached at the hip, that he was, unfortunately, standing under me when my water broke as I was getting out of the bathtub (pregnant with my first daughter).  Oh memories.

Over Twelve years, two moves and two kiddos later, Ozzy grew old, grey and content.  We found out in December that Ozzy had kidney stones and a herniated bladder (an injury he likely incurred when he took on a raccoon several years ago.  PS, Raccoon 1 - Ozzy 0).  The corrective surgery would have been about $4K, but due to his age (guesstimated about 14 years) and his grade 4 heart murmur and collapsing trachea, he wasn't a great candidate for surgery.  Even if he survived the surgery, he would likely have had heart failure.

Naturally, I was devastated by this news.  We held out hope that with a diet change and healing thoughts, Ozzy might turnaround.  And he did, for about two weeks.  Long enough to "snuzzle" (my daughter's word) a little longer, and for my kiddos to come to terms with the inevitable loss.  Three days before Christmas, my baby died and I've been in limbo ever since.

I've researched stages of grief, and I've checked off anger (sorry Family) and guilt.  I had the 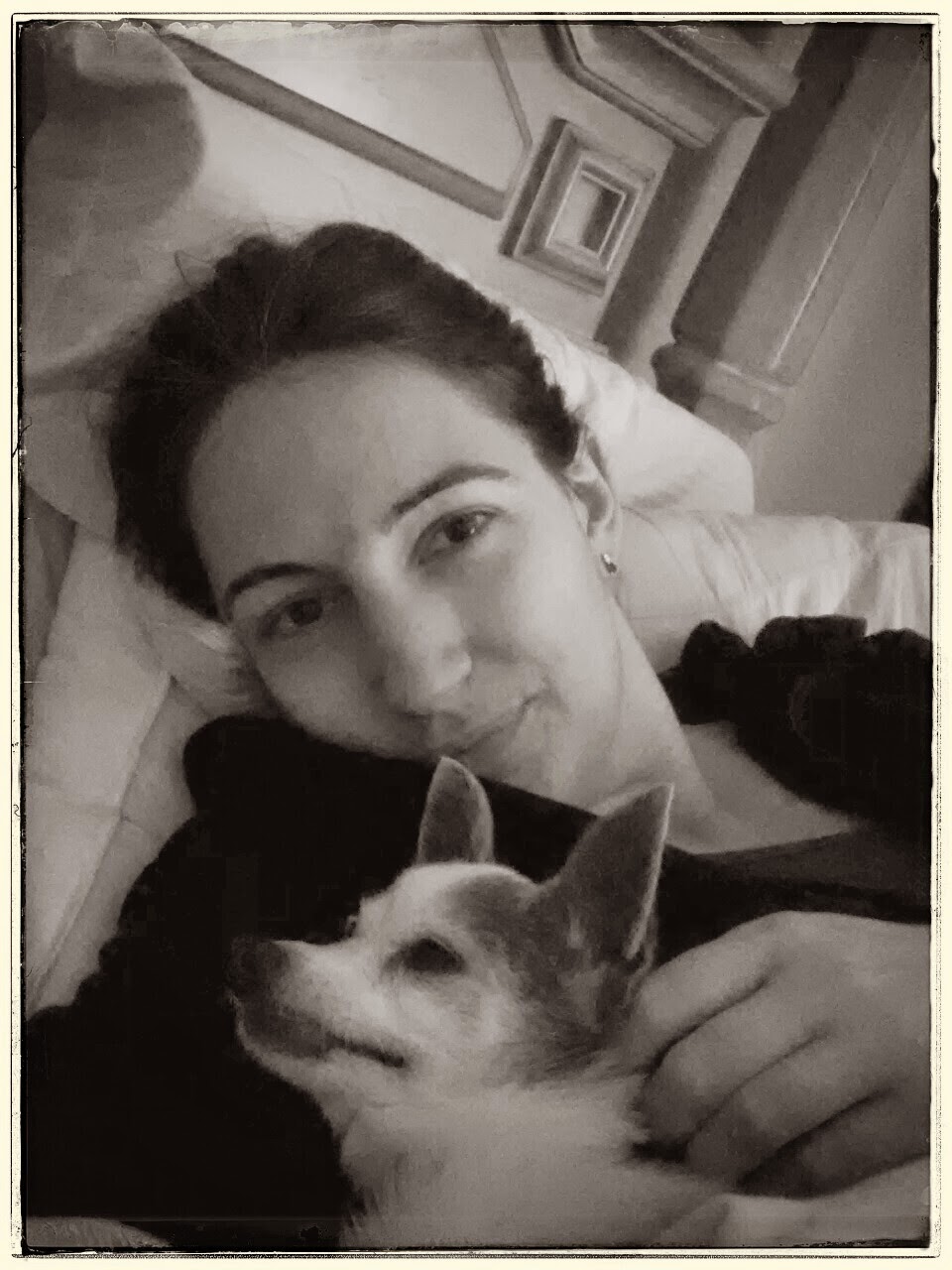 hardest time telling people that my dog died, when really, I felt like I had killed him by taking him in to the vet and letting her do it.  This was all magnified by the fact that I was holding him the entire time (Husband and girls went to get burgers.  I now see the irony).  I felt it only right that I be the one with him, given that he was mine and I was his.  I've now entered the annoyingly persistent phase of depression and honestly, have a hard time believing there's an end to it.  Like reading the Twilight books, but for real.

I didn't write this with the intent to throw a pity party or hear another "I'm so sorry for your loss," but more because I've come to realize that this level of grief is something I'm completely unfamiliar with and I hope that writing this down will somehow be therapeutic.  I've lost loves in the past (most notably my grandfather a couple of years ago) but this sense of loss is so overwhelming that it makes me feel guilty I didn't struggle like this previously.  I had no idea it could hurt this much.  I'm turning into a weeping recluse who feels pajamas are a valid wardrobe choice and, on most days, showering is too high maintenance.  Especially since staying in has the awesome appeal of avoiding other people.  To those who know, you've been here, I'm truly sorry, I get it.  To those who don't, I hope you never have to.

There are many people who would say, "He was just a dog" and to them I would say, "I'm sorry you have never experienced unconditional love in the truest sense of those words."  To which they may respond, "Yes, I have.  I have children."  And to that I would reply, "Exactly.  Then you do understand."

Posted by Winklepots at 6:00 AM 0 comments

Since most of us will be spending time with family and turkey tomorrow, I thought I would post a fun Thanksgiving sketch today to help set the mood. Hope you all have a wonderful holiday weekend and don't forget to save room for pie!

Since I've discovered a TON of great free music on Amazon, I have been addicted to finding and snagging some new tunes to add to my iPod. I literally spend hours scouring the latest new artists to find that diamond in the rough. I realize that musical taste is completely subjective, but you might find something you like in this list of songs or peruse online to find someone else who inspires you. All I know is, these artists are worth a listen and what a great way to be ahead of the musical curve. Just think, when your friends say, "Omigosh, you have to listen to this great new artist!!" you can say, "Oh yeah, I've had them on my iPod for months. They're pretty good." :o)

Enjoy!!
Posted by Winklepots at 7:00 AM 0 comments

Did You Miss It?

Because Ham & Cheese are Yummy

W - All Grown Up Line